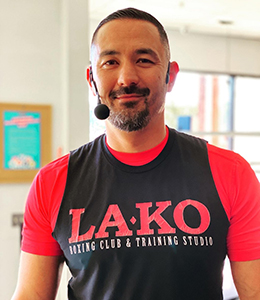 Yuichi Ohi has been training in the greater Los Angeles Area since 2000. He has extensive background and training in Boxing, Jui Jitsu, Grappling and Judo. Yuichi has trained in Judo starting at an early age under his own father and renowned 6th Degree Black Belt Mastoshi Ohi. Over the past 11 years he has worked with many famous actors shaping them up for their roles in such productions as Transformers and The Great Gatsby. Certified thru NASM as a specialist in both personal training and nutrition, Yuichi is renowned for his work with all fitness levels of clientele. His approach in training is an Organic and Holistic style with Yuich’s motto being.. WHAT MATTERS MOST IS THAT MY CLIENTS ARE HAPPY AND HEALTHY!!!

Yuichi is excited to work with all our members and staff in making LAKO the best gym in Los Angeles. David comes to LAKO BOXING with a huge pedigree in boxing. He has been boxing now well over 11 yrs,  and training others for over 5 years.  He boasts an undefeated record of 8-0 as amateur.  David takes great pride in working with all levels and ages! With over 6 muay thai fights to his credit and thousands of hours of training under his belt, Nick brings his skills to LAKO.  Nick prides himself  in his ability to have his clients lose weight, get fit and have fun at same time! 3x Junior Olympic medalist in Taekwondo,  Seth Coleman is in the house!!  With over 5 yrs of experience teaching others in boxing, Muay thai, wrestling and BJJ,  there isn’t a client that he cant train to be their best!! With close to 2 decades in martial arts and fighting skills, Spencer is an all around trainer. As a 2x  NABJJF champion he is no stranger to having a few belts around his waist.  Whether its grappling, muay, or boxing he is a expert source of learning! With over 12 yrs learning experience in boxing and muay thai, Manny brings his love of these sports to LAKO. Manny currently holds a 6-2 fight record but…. is undefeated in working successfully with clients of all abilities! He discovered boxing and kickboxing about 8 yrs ago in his successful quest to lose almost 100lbs.  For past 3 yrs Curtis has been coaching others in various fight sciences while also acquiring a strong background in nutrition and injury prevention. After a successful record as an amateur kick-boxer he plans to turn pro in 2021. 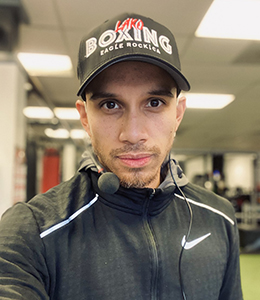 Jon brings a unique background as a 6-1 fighter and a Hip Hop Dancer/Choregorapher to LAKO. With over 13 yrs training in Boxing, Kickboxing, and Jui Jitsu Jon enjoys working with everyone and we know everyone will enjoy working with him! Keith comes to us with an extensive background in Muay Thai, Boxing, and Jiujitsu in MMA.  Sporting his own amateur record of 7-2,  Keith brings his finishers and winning ways to LAKO. 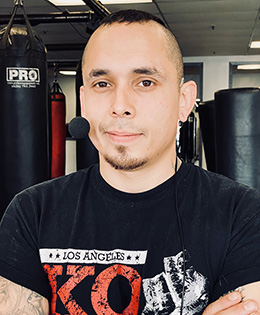 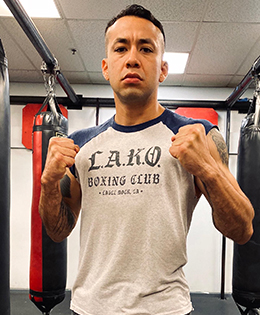 Army Vet Joseph Silva comes to LAKO with a 8-2 record in Muay Thai and over 5 yrs of training others in Boxing, HITT, Muay Thai and Kickboxing. Josephs love of martial arts is infectious and brings great energy. 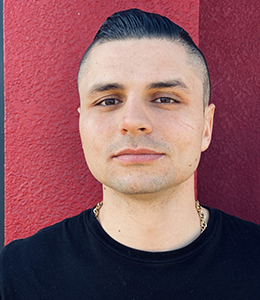 Andrei is an example of how martial arts, weight training, and nutrition combine for maximum benefit. Originally 220lbs, Andrei used his skills and knowledge to reduce down to a mean, lean 168 fighting machine. Training now others for over 5 years in boxing, kickboxing and weight loss, Andrei brings his energy and positive attitude to LAKO BOXING. 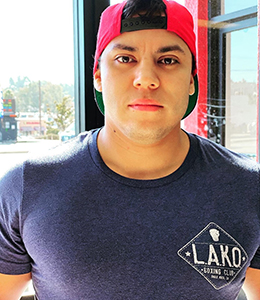 He began boxing at age 23 to work off the stress of being a social worker. Almost 20 years later, Omar is a full time professor at USC and has numerous championship belts in Master Boxing (for amateurs 35 yrs and over). Combing his love of teaching and boxing he has become our Master of Masters! JACKSON PEARLE
Jackson punches his way onto our staff with a 6-1 amateur boxing record, a strong background in kickboxing, wrestling, and MMA. Jackson is a well rounded fighter that also has been training others for well over 5 years.

Orion comes to LAKO with a 6-3 Amateur boxing record, and a history of training under champions in everything from Boxing, Muay Thai to MMA. With over a half of a decade of training others, Orion brings his unique combo of fight and martial art knowledge to our clients! ROBERT ALVAREZ
HE IS AT LAKO BOXING!!
What do you say about an instructor with over 25 yrs of coaching, fought in over 65 amateur bouts, won many belts such as the National Golden Glove State Championships.

Must have proof you live or work within 10 mile of LAKO BOXING. $10.00 trial class must be reserved. Once a member joins, classes do not need to be reserved. Please give us approximately 24 hrs to respond to request. May not have been a member or guest before.

We are located at:

Minutes from Glendale, Pasadena, and Hollywood.